Vocalist SHEILA LANDIS teamed up with 7-string guitarist RICK MATLE in 1991, sensing a kindred musical spirit. Together they continue to explore jazz balladry, bebop, blues and country music, poetic excursions, Brazilian rhythms, funky/pop/classic rock and their own inventive collaborations at every performance--elegant yet edgy. Matle, a 1986 Oakland University Music Performance Graduate, combines a rocker's bravado with the jazzman's sensitivity and harmonic stretch to provide a buoyant springboard from which Landis launches her melodic flights, earning her the accolade of "Outstanding Jazz Vocalist" seven times, as bestowed by the Detroit Music Awards. In a quest to alter her tonal palette and extend her creative reach, Landis has begun to add credible vocal imitations of the trumpet and the harmonica to her jazz solos in addition to playing a variety of Latin percussion instruments. Initially inspired by the duets of Tuck and Patti, Landis and Matle similarly stretch musical boundaries and continue to inspire and challenge each other, making each performance a new adventure. 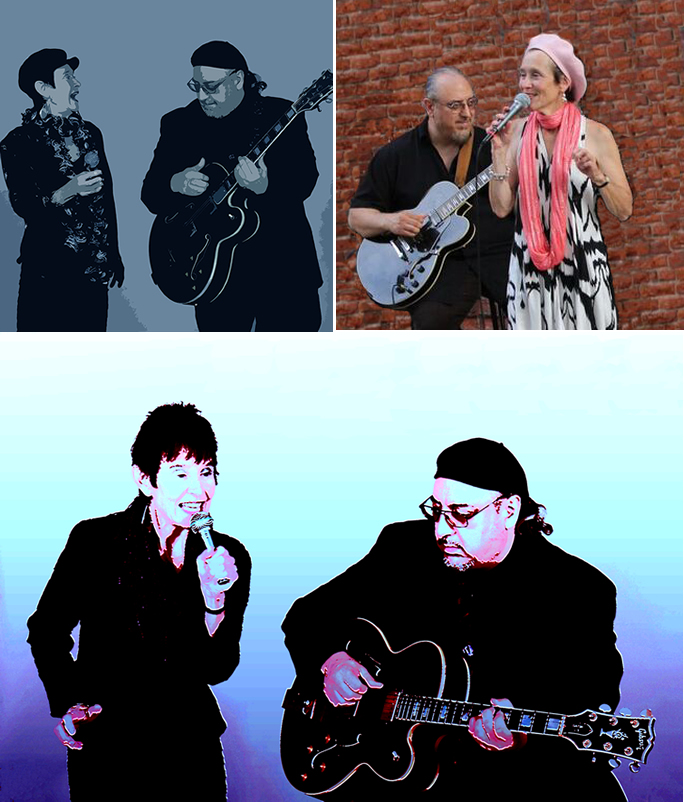 Adding a drummer to the solid foundation of the Sheila Landis/Rick Matle Duo creates the perfect "little big band" when a fuller sound and a deeper groove is desired. The Sheila Landis Trio percolates with rhythmic sophistication and finesse, perfect for intimate jazz concerts, festivals, country club events, private parties and more. The Sheila Landis Trio has been featured frequently on "The Mitch Albom Show" and has appeared on FOX2 Detroit, WDIV-TV and Rebirth Live WDET-FM. 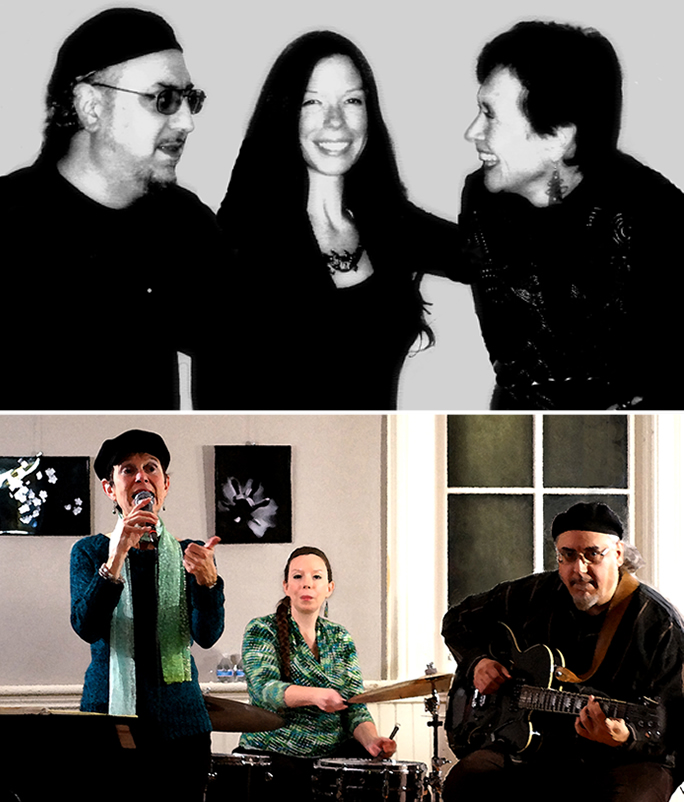 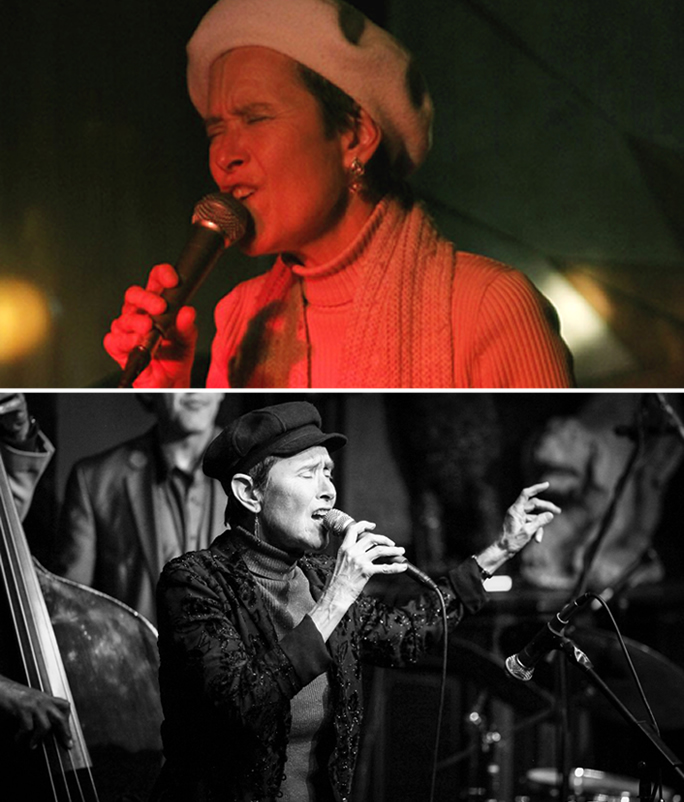 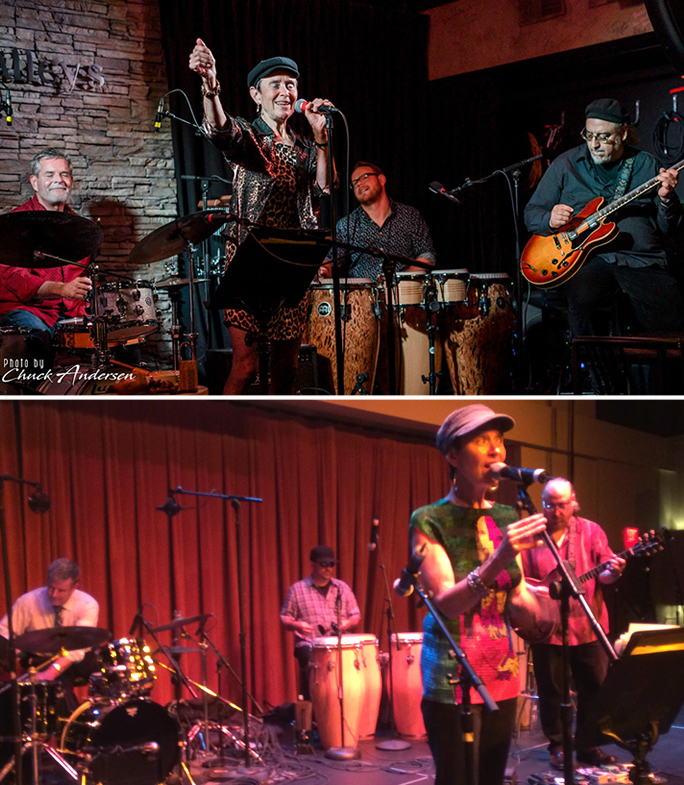 Blues In The Night

Post-War Big Band swing gradually bumped into the 12-bar blues from the southern U.S. as well as from urban centers like Chicago and Kansas City, giving birth to the foundations of modern rock-and-roll in the early 1950's. Sheila Landis & Blues in the Night often features guest artist Dan Devins with his tasty harmonica and hard-hitting vocal interpretations of blues classics like "Caledonia" and other high-spirited novelty tunes popularized by showman Louis Jordan, including "Saturday Night Fish Fry" and "Blue Light Boogie". Available as a 5 or 6-piece band, Matle's guitar nevertheless reigns supreme in this incarnation, frequently calling up the spirit of the blues from T-Bone Walker to Jimi Hendrix. 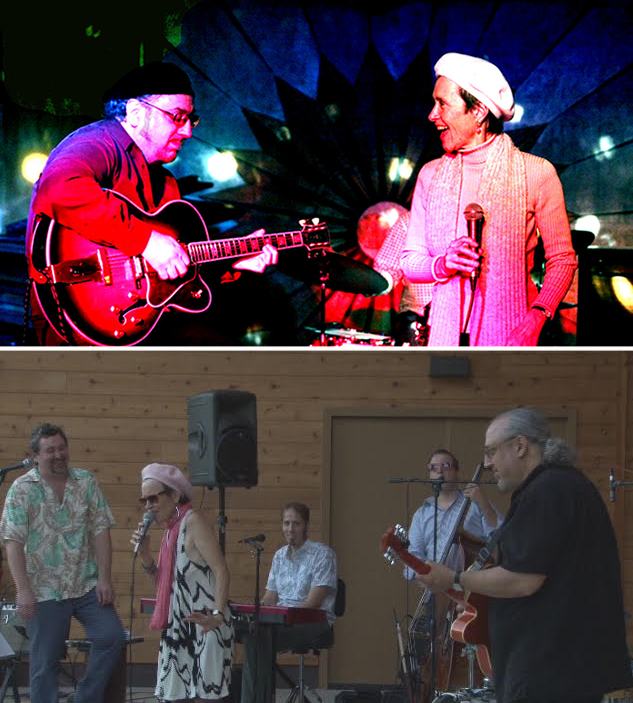 Nothing sparks a memory like a melody! Vocalist Sheila Landis entertains for seniors with verve, style and plenty of good humor, emphasizing Great American Song Book classics and familiar pop tunes spanning the decades from the Roaring 20's to the Rockin' 60's. Spirited accompaniment is provided by 7-string guitarist Rick Matle as he and Landis weave their way through timeless tunes like "Side by Side", "Five Foot Two, Eyes of Blue", "You Are My Sunshine", "It Had to Be You" and "Let Me Call You Sweetheart". Landis and Matle deliver an engaging, heart-warming show, inviting everyone to sing-a- long. We strive to put the "Happy" in "Happy Hour" and we love it when seniors react positively to our music. Our recent shows at senior living communities have included All Seasons (Birmingham, Rochester Hills and West Bloomfield), Blossom Ridge in Oakland Township, Henry Ford Village in Dearborn, Independence Village in Plymouth and White Lake, Cedarbrook in Bloomfield Hills, Botsford Commons, Advantage Living Centers in Redford and Warren, Anthology of Rochester Hills and Troy, Pomeroy Living Orion and many more! 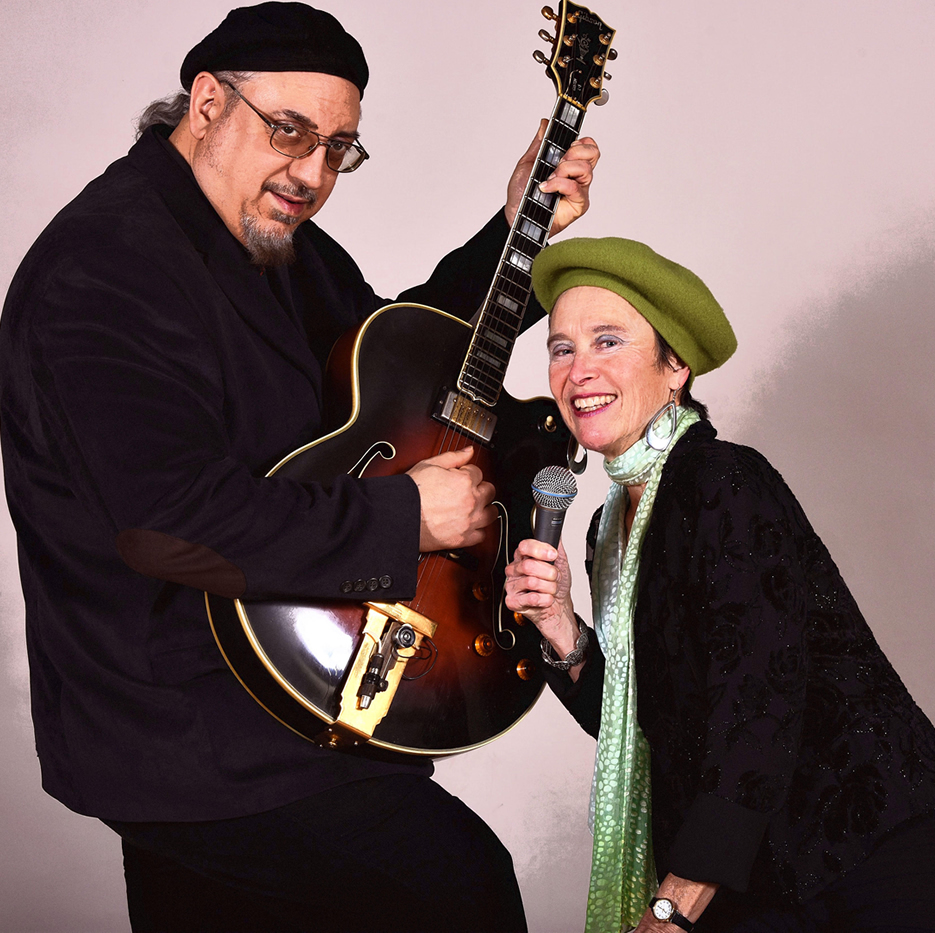 SALUTE TO MOTOWN AND SEVENTIES SOUL

Take a trip down memory lane and sing along to the hits performed by soulful songstress Sheila Landis and her grooving band. Detroit entrepreneur Berry Gordy Jr. founded Motown Records and immediately captivated the world in the early 1960's, turning out unforgettable pop tunes characterized by dance-able beats, hip heart-felt lyrics and catchy choruses performed by Smokey Robinson and the Miracles, The Four Tops, The Temptations, The Supremes, Marvin Gaye and more. Similarly, Philadelphia in the early 1970's introduced what came to be known as "Philly Soul" with its smooth, sweet, romantic favorites sung by such tight-knit vocal groups as The Stylistics, The Spinners, and The Delfonics. 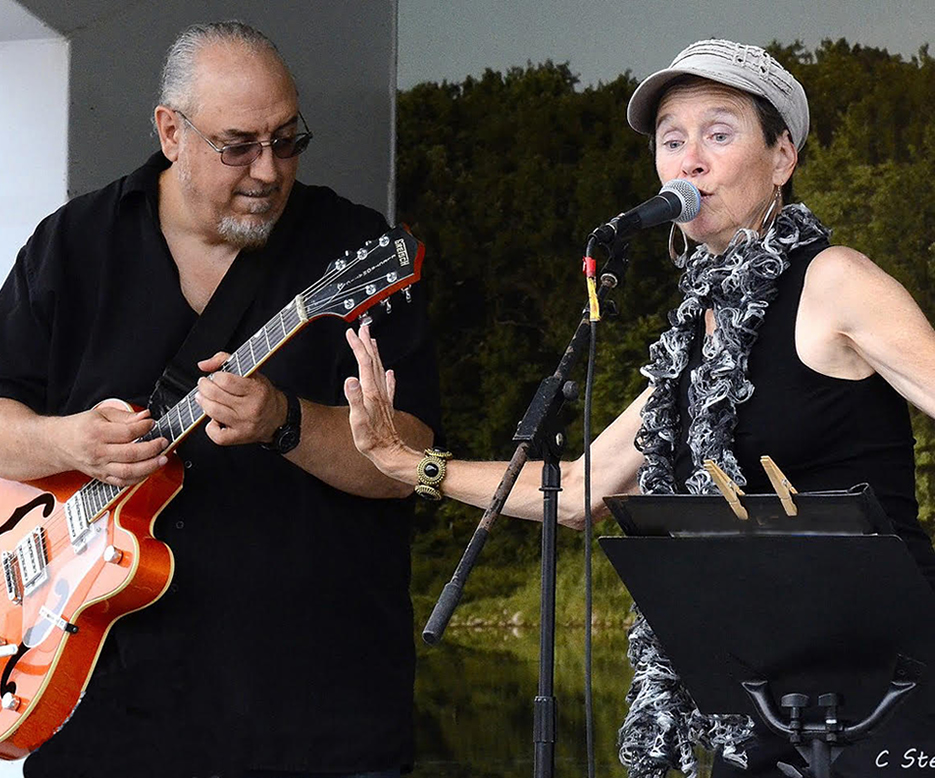 Sheila Landis honed her skills as an announcer/on-air personality at the Specs Howard School of Broadcast Arts, graduating in 1988. Fascinated by audio gear since his teens, Rick Matle maintains his own well-equipped recording studio in Rochester Hills. Recording clients include Alberta Adams, The Millionaires, The Brothers Groove, Bill Heid, Sunaga T Experience, Joe Weaver and Andrew Gunsberg. His studio services include full band recording/production, CD mastering, editing and mixing as well as the production of voice-overs for local and national clients. Rick's guitar work, via his vast collection of guitars and amps, as well as Sheila's vocal talents are also available for collaboration/overdubs via the internet. 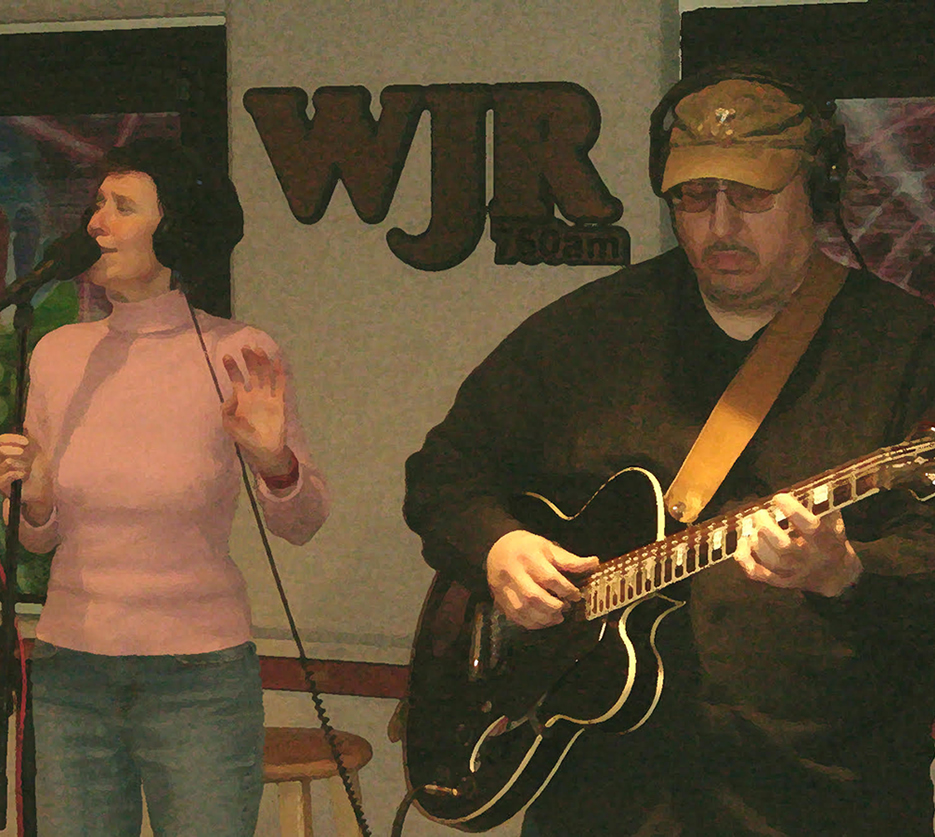